This is the solution to the problems of foot launching

The pilot doesn’t have to wait until the wind has established straight ahead, its a launch option offering the highest safety, it’s easy, without any piloting particularity. 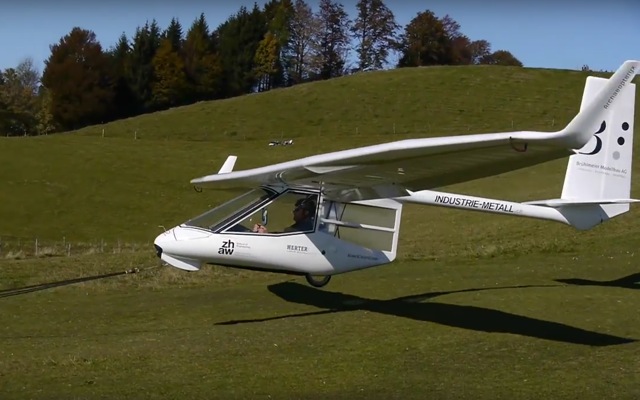 Movie of bungee launch operations (click on the picture)

Bungee take off from a flat land is also possible (for training purpose):

Some takeoff areas, most often in Switzerland, are already equipped with fixed rings anchored into the ground; you are quickly ready: you have 4 to 6 bungee lines to stretch successively by hooking them to the 2 rings or posts around 40 meters on both sides in front of the glider, they form a V shape, the catapult exercing a 150DaN force, largely enough for an ultralight glider’s takeoff whose stall speed is usually lower than 50km/h.

If the ultralight glider is equipped with a specific release system (Archeopteryx), it is hitched up to a ring attached by a short rope to the aft anchored ring or post. The pilot himself will command the release to takeoff.

If not, it’s the catapult itself which is hitched up to the release system which is anchored into the ground aft of the ultralight’s take off position. The glider is then put into position and hitched up to the catapult by another, but shorter rope. In this case it is a person on the ground who will command the release system when ordered by the pilot.
In both cases, the release system must be equipped with a safety pin in order to avoid any involuntary release as long as the pilot has not completed his preflight preparation and checklist, and the safety is not checked (area cleared).