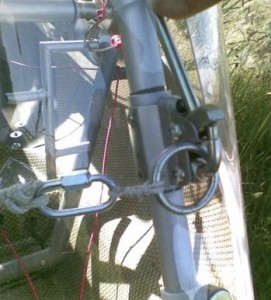 as it was delivered, had a safety issue : one time while being aerotowed, the towline was released from the tow trike (due to a false hooking) ; when back over the airfield I wanted to release the towline before starting my approach, but I couldn’t… so, the airfield being very long, I made a high enough above the threshold final approach so as the towline couldn’t hurt trees or bush, then when it eventually hurt the ground it was grass from the airfield and could gently slip on the ground without generating any tumbling… and I could safely land 🙂 on a short field I wouldn’t have been able to manage such a safe emergency approach… 🙁

The fact is that if the line is released by the tow plane, it is hanging to the Swiftlight at such an angle that the hook of the release system will not open when commanded by the pilot. 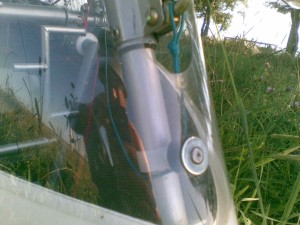 After that event I made a little modification to the release so as it could never happen again : I added a second control line which allows the pilot to pull the hook downward to force it to open, should the towline be released from the tow plane ; it’s very easy to install, see the blue line on the photo.