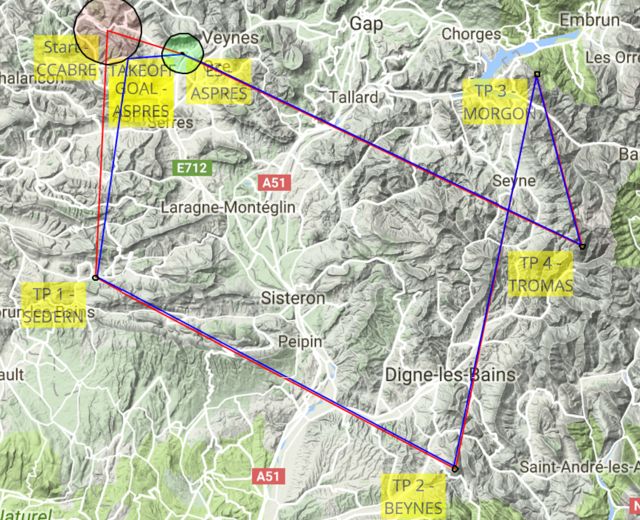 After 2 days with no flying due to Mistral, the wind is expected to be weak, and the air mass cold and and unstable, with thermals mostly blue toping 3000m; but a more stable air mass is expected to enter in the southern Alps from the NE, and the N into the Buëch valley during the afternoon.

The gaggle lasts till the Crête de l’Ane after turning Sederon, Roger Ruppert a little forward but always lower.

Then he follows the straight course to the 2nd turn point. Philippe flying another Archeaopteryx follows him at the begining, but approaching the Durance, he set course to the other pilots who crossed the valley at Sisteron.

Approaching Authon from Sisteron was difficult: bad thermal on the lee side of the main ridge; one pilot landed out, many others lost time in plus or less severe low points. Manfred of course was first to escape this bad area.

Meanwhile, Roger crossed the flat lands alone, between 1200 and 1500m…

He met Manfred at the second turn point; then from Coupe, he flew directly to the south of Cheval Blanc, while Manfred followed the ridge and climbed on the North face. Manfred definetly took the lead.

The other pilots behind were racing without any hope to reach Manfred; unlucky were those who arrived late in the short cycled thermals…

The Blanche (in the “Parcours”) was not generous, but those who stopped to climb in the thermals made then very bad glides.

From Traumas to Oratoire a converging line was materialized, but then gliding to Malaup was in heavy sinking air. Fortunately the thermal from the Malaup was active, and Aujour was not yet in the North wind; nonstop glide from Malaup to Aspres  🙂

7 out of 9 pilots made the goal; Manfred Ruhmer (A/Swiftlight) winning at 55Km/h, 10′ ahead of Roger Ruppert (CH/Archeopteryx). Results are in the  “compétition” menu.