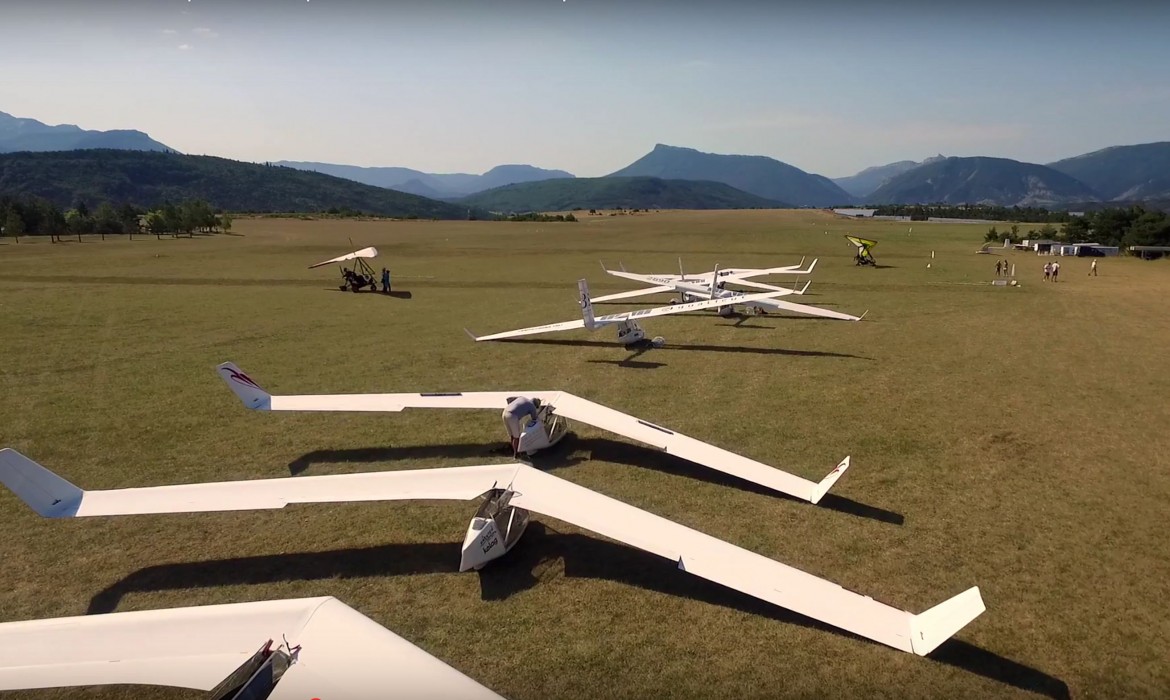 South wind expected to rise to 40km/h from West to East, with blue thermals reaching 3000m at 2pm.

Short task, 140km, set in order to have the pilots back at 4pm just before the wind becomes too strong: Start Longeagne West R=3km, Pic de Bure, Aujour, Chabanon (R=12km), Col St Jean, and back to Aspres airfield.

The first pilots to be launched just couldn’t climb, staying airborn was the deal… at noon, when the start line opened, the highest pilots were only 150m above the ridge… nobody really wanted to start, but Roger took a chance, flying easterly to the low mountains North of Veynes; the others observed him, and when he got his first thermal, they eventually went away, but it was still very weak, and 2 pilots had to land out scorring minimum distance

Approaching Pic de Bure the thermals became better, but the head wind leg to Aujour was in an almost dead air, and we lost 2 more pilots…

Aujour was still not good, but just enough to cross the Durance valley and reach the ridge to follow to Malaup where a powerfull blue thermal allowed the pilots to refill altitude before going to the 3rd turn point.

The crossing of the wide Durance valley to Chabre ridge (Laragne take off) was a challenge with the stronger and stronger S to SW wind, most of the pilots choosed to proceed via St Genis, Jacques strait ahead.

At the time when they made the 4th turnpoint, Sedron was transmitting SW wind 41 km/h gusting 56…

Returning downwind was easy, except for Roger who didn’t take enough altitude margin and had to “reffil” at Arambre

5 out of 9 pilots at goal, Manfred winning at 43km/h, second is Roger at 4 minutes. See the ranking in the “Competition” Menu.