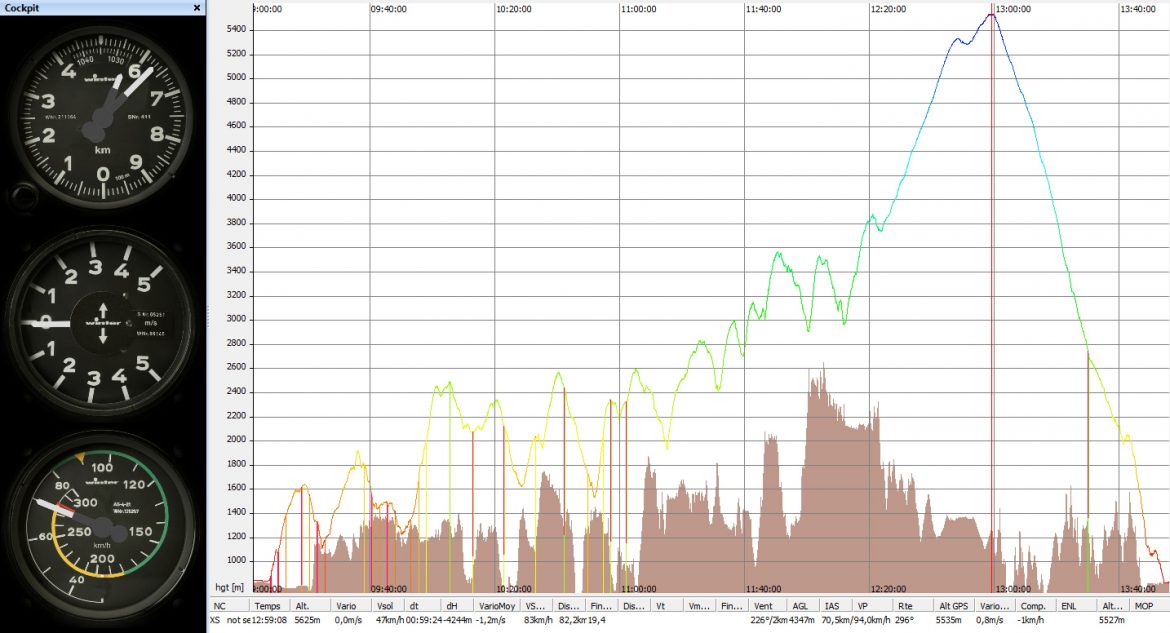 Great season start for Jacques, April the 20th; here is his report of what is probably the highest altitude reached in free flight in Europe:

Take off 11:05 for my first XC flight of the year, aero-towed by a pilot doing his first ultralight glider aerotow, supervised by Pascal in the right seat of the Ikarus C42. Weak NNW flow of a cold airmass, very turbulent, half way up the weak-link broke, but I could catch a thermal in the middle of the valley, then glide to the west ridge where climbing was not so easy as the wind was parallel to the mountain. I waited on Pascal, who had to change from the right seat of the tow plane for that of its Swiftlight… first weak-link brake at the runway end… we started too late, the unstable icy and dry airmass and the sun are already generating strong turbulences… the second attempt: second weak-link brake… finally the third one was successful. But it lasted one hour, and I was already rid of the turbulences… we flew together to Aujour were the thermals were still turbulent, got high enough to cross the Durance valley to Malaup, but it was cold, and I thought about coming back and land in Aspres… During the crossing, I put on my gloves and switched my cap for a warmer ski hood… the Malaup gave us the first good thermal, +5 and round! Above 2300m the air mass was smooth 🙂  so let’s go to south.

Jouère unexpectedly gave nothing, neither Auribeau, but a glider showed us a good thermal over Authon, were we got high enough to continue East toward the Blaieul were the first fragments of cumuli could be observed very high. On course we shared a generous and wide +3 +4 with many gliders, then we refilled over the Blaieul and continued eastward toward the 3 Evêchés.

There I decided not to go further South, as we had to land early in Aspres because of a strong North wind forcast after 5pm. So we followed the Blanche to the North: our plan was to cross the Ubaye and Durance valleys and fly in the southern and western part of the Oisan, against the North wind, which in this area was weaker than in the west; and there were many good looking cumuli with an estimated 3800-4000m cloud base. As there was not any trace of cumulus over the Morgon, we made a comfortable 3800m refill over St Jean Monclar which should allow us to glide non stop till the Guillaume despite the headwind which was around 20km/h. 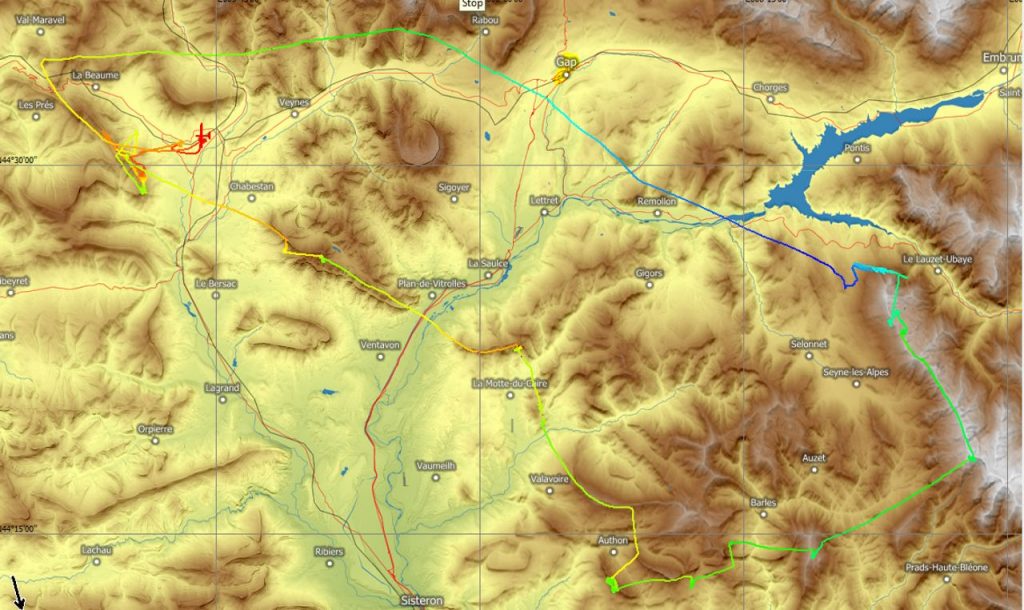 Leaving over the Fort de Dormillouse, the glide was very good, no strong sink as feared, and surprisingly, the variometer went better and better, and it eventually started to “sing”, in a perfect smooth air 🙂  I observed the head wind indication of my Compeo+, it increased progressively, so as the vario; when I got 1m/s I stopped flying NNE, and started a leg to the right, monitored on the map display of my Oudie 3; it started to decrease after a short time so I reversed the course, flying exactly the same line on the GPS map, but on a reverse course; the drift angle was about 30 to 40° the rate of climb increased again, reaching +1,6m/s… when later it started to decrease, I reversed the course, and noticed the maximum headwind indication on my Compeo during the turn: -35km/h.

I was in the wave 🙂 ! passing 4000m I switched my oxygen ON. I continued the out and returns in the area of best rate of climb, trying to keep the line on my GPS map. I had to pay attention, as the drift angle increased with the altitude. Pascal had forgotten to open the valve of his oxygen bottle before take off, so he had to decide to stop climbing at 4100m… too bad, but wise decision.

After a turn, at around 5200m, when trying to set the good heading in order to keep the line, my Oudie showed strange courses: S, then SE, “Hey! The GPS failed” was my first thinking… I checked the course indicated by my Compeo: it was the same! “Damned! I’m flying rearward!” I didn’t set big enough a drift angle, so I turned more the nose of the Swiftlight in the direction of the wind… the ground speed was 20km/h, but the course went to WSW! I turned too much! I reversed the turn, slowly, to find the exact direction of the wind, watching the wind component on the Compeo: I could read -85km/h! “Waooo!” I decided to accelerate, full head wind, setting my flaps to zero: my ground speed went from 20km/h, to 15! I continued to accelerate, the ground speed continued to decrease, then increased again! I was flying forward again  🙂 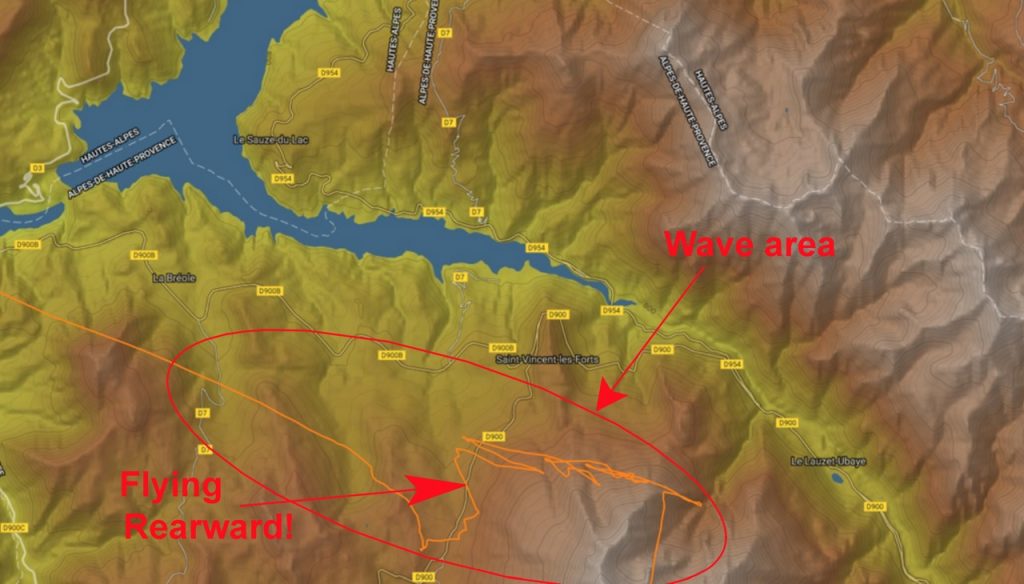 I managed to recover the distance lost, then reduced a little the speed and resumed climbing at an almost zero ground speed with almost 80 km/h head wind! At 5400 I took my iPhone out of my pocket and took some pictures of my Compéo, but after the second one, it went off: too cold for its battery! And not only my iPhone was frozen, so were also my feet, in the shadow of the wings. 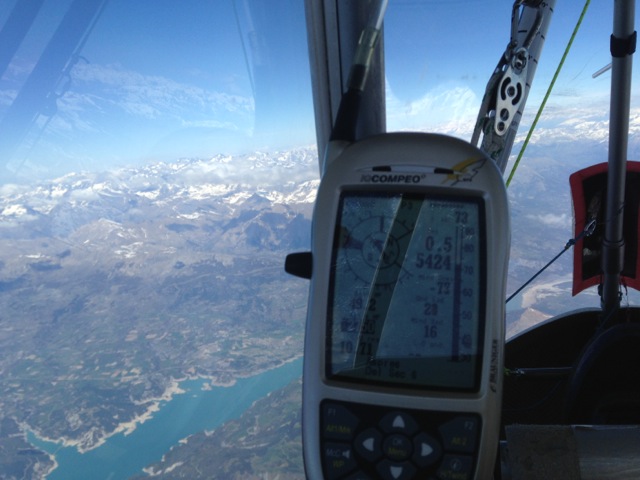 At 5600m I couldn’t resist to the cold anymore and decided to glide back to Aspres, which shouldn’t be a problem with that huge altitude. It was amazing to glide at 90-100km/h with a drift angle of almost 70°. After overflying Gap, at around 4000m I entered again into the colder convective layer, but the wind went down, I could set heading WNW, and my feet were back in the sun 🙂 . Crossing around 2500m, abeam north of Aspres, the strong turbulences resumed. I used my excess altitude to fly over Col de Cabres in the west, crossing some wild and strong thermals, then turned back to Aspres were I landed in a gusty 40km/h NNW wind 15 minutes after Pascal.

To replay the flight in 3D, click on the picture:

The wind speed, 85Km/h at 5400m might looks hazardous, but at 90Km/h indicated speed which is the usual gliding speed of the Swiftlight, it’s true airspeed is 117Km/h; its never exceed speed (Vne) 120km/h is 156Km/h true air-speed at that altitude. So there was a comfortable safety margin; and at this altitude, I was 3000m above the mountain, far above their turbulences, and wave generating air-masses are stable.

The danger is in the rotors below the wave, but hey are at a much lower altitude, where the wind is much weaker.